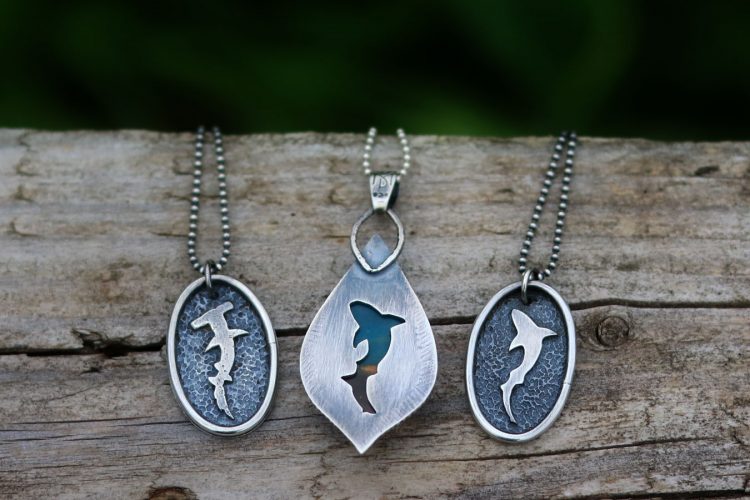 Sharks aren’t monsters, as media makes us believe. A scary creature with thousands of teeth that’s coming for you! If we continue threatening them like in the past 100 years, maybe the sharks who survive will really think about that (I wouldn’t blame them), but they rather prefer eating smaller fish and invertebrates. These great fishes evolved millions of years before humans existed, we aren’t their natural food.

Why am I talking about sharks?

A bunch of these gorgeous blue opal wood cabochons were in my possession for about two years, I was taking my time to find out the right design and theme for them. Being a huge fan of sea and any water I can dive in, I find that the colors in these gemstones represent sand and salt and oceans, the iconography of marine life. What in a best way represent these waters? In a wink of an eye I got a shark image in my head: an image of a great, intimidating animal, and so important. I couldn’t go further without investigating more about them.

One of the interesting facts I found about sharks: during his entire life a shark can have over a 30.000 teeth! Most sharks have 5 rows of teeth, and about 3000 teeth at a time! Despite they loose about 100 a day, they never run out of teeth. Good for them.

I erroneously thought that sharks live only in oceans and opened seas. Well, I discovered that almost completely enclosed by land Mediterranean sea is also their home. There are about 45 species of sharks that breed and live there (a Great White Shark and a Hammerhead Shark are among them). And I thought the biggest animal in Mediterranean sea is dolphin (and it’s mammal, not fish, as a shark, just f.y.i.), who showed themselves in the port cities and near the coasts, thanks to lockdown during this virus period.

Finally, why are they so important?

This research has opened my eyes on some very important aspects of underwater life. I knew sharks are at the top of the food chain, but didn’t know the importance of that. For millions of years sharks have been controlling the balance in ocean ecosystem, ensuring species diversity. Here is a good article from Forbes that speaks about the importance of sharks in our oceans.

Sharks limit the abundance of their prey, which affects the prey of these animals, and so on through the food chain. This way they maintain the health of the ecosystem. Sharks are like “doctors”, they eat sick and old fishes, keeping the populations of fishes healthy and strong. They are also important for coral reefs. If they stop eating smaller predators that prey on herbivorous fishes, the populations of these fishes decline and sea algae starts grow in abundance, overgrowing the corals, which leads to coral bleaching and storms.

Shark’s body (as well as whales and other big sea animals) can store huge amount of carbon! They keep the cycle of carbon under control also by preventing seagrass meadows from being overgrazed, keeping herbivorous animals in a constant move, because of fear, from one place to another.

Sharks maintain the balance in the marine life. Drastic decline of shark population leads to destruction of balance. Millions of these animals die each year because of unconcious, irresponsible and egoistic human actions. About 75 millions sharks die each year for fin soup, that is only about 5% of their body. Other millions are catched for their meat, and also as unwanted by fisheries who target other species.

Sharks grow slowly and produce relatively few baby sharks. Their population has been depleted by 90% in the past 50 years, which is really allarming.

I believe we can still make a difference

More sharks means healthy oceans and balanced marine life. Humans should be happy to see more of these beautiful and important fishes in great waters. We can’t ignore the fact that sharks are facing the risk of extinction and we should do any possible thing to protect and let them live in their waters.  The best way to start making difference is starting from ourselves. I decided to join this cause and donate 10% of proceeds from sales of MARINE collection pieces. Buying any of SHARKS jewelry piece you will not only support my small handmade business, but also these great beautiful animals – sharks. Each 3 months I will donate to the SHARK RESEARCH INSTITUTE to help them do their job. I hope you will join too!

Follow me on Instagram for updates, new items in the MARINE collection and news about my donations!

Some good articles for more info:

If you are interested to help, here are some useful links:

Every single piece is inspired by forms and colors of nature, senses and objects that are everywhere around us. Each creation is unique in it's form and composition, and carries a part of my soul. ~Asta ~ owner and creator of FMD
Related Articles
Big quartz jewelry collection – Part I
Summer vibes – Part II
Summer vibes – Part I
Subscribe
0 Comments
Inline Feedbacks
View all comments